I had just completed a series of paintings based on my feelings about Hawaii. Listening to songs by Israel Kamakawiwo’ole, “Somewhere Over the Rainbow” and other Hawaiian hits in the “Pick a Hit Hawaii”, I paint with imagery created by the songs – paradise, waves splashing on the shore, idyllic life….and the volcanoes. Even though there were no mentioning of volcanoes in any of the songs, there were mentioned of conflicts of past and present and future concern of their people, or adjusting to the mainland lifestyle.

This site uses Akismet to reduce spam. Learn how your comment data is processed.

Prints of my sketches are available on my Society6 shop. 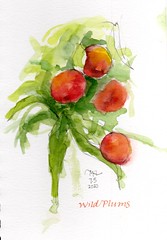 I Am a Daily Paintworks October Contest Winner